Ahead of their meeting late June, a petition calling for a conference of ministers of contracting states under Article 4a EPC has been sent to the members of the Administrative Council of the EPO. 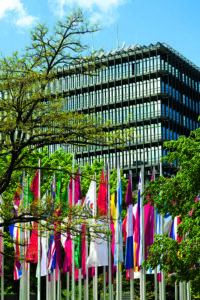 The petition is an initiative of the EPO’s trade union SUEPO, which has invited all staff members to sign it.

According to the petition: ‘the development of the European Patent Organization (…) has increasingly departed from the structure and its mission as foreseen under the EPC and it appears that no appropriate countermeasures will be taken.

We call on you to have anew a close look:

We also call you to reflect on whether the strategic governance of the EPO is compatible with the long-term continuity of the Organization’s existence and with the future fulfillment of its mission, also in the context of its role in the Unitary Patent system.

We ask you to transmit this petition to your Ministries in order to convene such Conference without delay.’

‘It appears that the EPO is being more and more transformed into a profit center, which is – in our view – inappropriate for a public service with quasi-judicial bodies responsible for granting monopoly rights by sovereign acts, which have a wide impact on their owners, their competitors and on the public. (…)

Backlogs in examination and search are increasing and it appears that for tackling the problems the current line management is tempted to return to outdated management approaches like “challenging people” measures and management “by fear”, which are unworthy of a modern organization like the EPO with highly qualified personnel. At the same time the EPO plans to reduce the staffing level in core tasks even further. This adds to current plans squaring with a large-scale decentralization of EPO tasks, including transfer of tasks to NPOs. Such significant amendments of the Organization’s structure fall outside the prerogatives of the President or the Administrative Council as defined in Articles 10 and 33 EPC. Furthermore, such a decentralization of EPO tasks would also affect the legal certainties of the validity of the patents granted by the EPO.

Apart from that, virtually all reforms of employment law since 2013 have been legally challenged, a number of which were already considered as null and void by the ILOAT (see e.g. Judgments 4430 to 4435 or 4482) or even in breach of fundamental rights; no significant investments have been made for reviewing the other reforms at stake. The EPO has obviously been unable to develop and apply new policies in line with legal constraints as defined by the ILOAT, so that further embarrassing judgments are to be expected. (…)

The non-exhaustive list of signs of derailment of the EPO includes:

Management of core business and Quality:

According to the European Patent Convention, meetings under Article 4a are due to be held ‘at least every five years’ but since 2000, when the article was introduced, such conference has never been held.

The AC meeting of 29 and 30 June 2022 is especially interesting as a decision will be made about the re-appointment of president António Campinos, who started in office in 2018, for a second five-year term.

The petition and developments at the EPO over the past period have shown that Campinos has clearly failed to achieve one important goal. Although agreements were reached with several people who had been fired or punished unlawfully by Campinos’ predecessor Benoit Battistelli, hope he would restore social peace at the EPO has vanished.

The relation between management en staff is tense. Since February industrial actions have been held, there was a day of strike and late April the Central Staff Committee reported about an outburst of anger of Campinos during a meeting described as ‘abysmal’, in which the EPO president ‘used foul language throughout (…) and insulted most of the speakers.’ The EPO declined to comment.

It remains to be seen what the AC’s reaction will be to the petition, which is a sign of the troubled relations at the EPO as well. Kluwer IP Law contacted several members of the Administrative Council about the performance of Antonio Campinos during his first term, but non of them wanted to comment.