Executive version: Quite a few scholars have tried to decipher the hymn sheet shown on Elias Haussmann’s famous portrait of Johann Sebastian Bach. This blog tries to decipher the latest changes in the EPO Management just announced by the President. 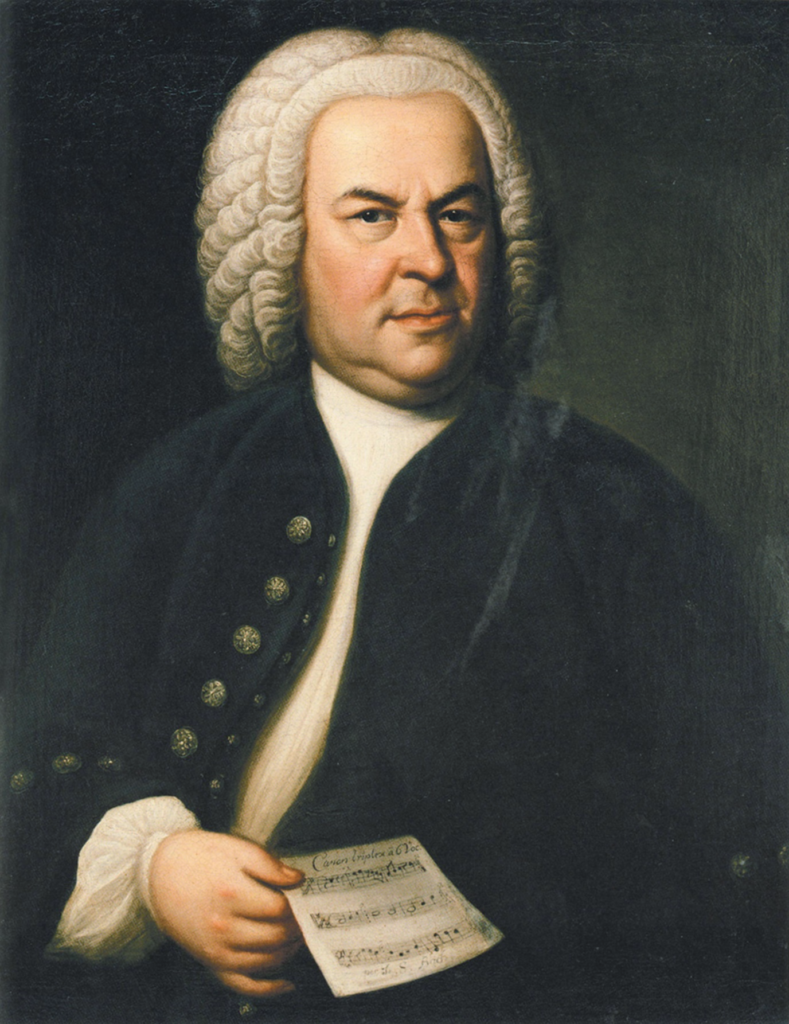 On a peaceful, sunny morning as we had it today I sometimes indulge in the pleasure of listening to a Bach cantata during breakfast. I can only highly recommend this: it is good for your peace of mind, elating for your spirit (at least if you love classical music) and almost always educational as well, particularly when you listen to and watch the fantastic performances of the Netherlands Bach Society, available free of charge and ads and together with excellent explanatory notes here. Yesterday, for example, I listened with joy to BWV 110 „Unser Mund sei voll Lachens“, this morning I moved on to BWV 120 „Gott, man lobet dich in der Stille“. And then I opened my inbox.

It contained a reference to the EPO President’s Communiqué_Adjustments_to_Organisation_Structure_20210124 announcing several „adjustments to our organisational structure“, most of which are to become effective 1 April 2022. It is a highly technical document, full of management gobbledegook, not easy to understand for an EPO outsider, so let me try to analyze it a bit. Firstly, for background, the EPO has an considerable number of directorates and principal directorates („PD“) all of which are entrusted with management tasks. You can find a handy summary in the EPO’s organizational chart here.

Looking next at the melodious titles of the managers in charge of these entities and trying to figure out what these titles mean, I could not escape the feeling that this organization no longer resembles an “office”. To me, it was much more like looking into the machine room of a very big corporation. Let us call this organization European Patents Inc. for the moment.

Namely, the EPO / EPInc. employs, in addition to a President and four Vice Presidents, inter alia: a Chief of Staff, a Chief Technology Officer, a Chief Financial Officer, a Chief Information Officer, a Chief Sustainability Officer, a Chief People Officer, a Chief Business Analyst, a Chief Economist, and a Chief Corporate Policies Officer. I intend no offence to the numerous other PDs of probably equal rank but with no “Chief” in their titles and instead kindly refer readers to this EPO website for more titles, names and faces. In summary, EP Inc. has a lot of chiefs, each one of them with a couple of underlings (aka “Directors”) and sub-underlings. The principal directors and several selected directors form the EPO Management Advisory Committee (MAC).

A couple of changes have now been announced in this management structure, at least officially “to consider the needs of all our stakeholders, with the primary aim of further deepening collaboration and strengthening our One Office culture”. I will leave it there and focus on the changes in just one sector that I found particularly interesting, i.e. “Corporate Policies”. This is perhaps not a self-explanatory title for an office (assuming that the EPO still is an office, not a corporation). What are corporate policies of the EPO, and should they not be called “Office Policies”?

Anyway, the “PD Corporate Policies” used to include three directorates, (i) Compensation and Benefits, (ii) Employment Law, and (iii) Workforce Planning and Employee Policies. These seem to me to be typical tasks of Human Resource Management, yet I note that the present structure also included a “PD People” with again three directorates two of which have “HR” in their names. Thus, not exactly a simple structure.

In strict adherence to the second law of thermodynamics – entropy always increases -, the planned new structure may be seen to be even more complex than the present one, because the classic HR functions will now be divided between no less than three Principal Directorates, i.e. PD “People”, PD “Corporate Policies” and a new PD “Employment Law and Social Dialogue Advice” that will be under the direct responsibility of the President himself. But there is also another and perhaps even more interesting way of looking at these changes, and that is from the point of view of the PD Corporate Policies.

Namely, this Principal Directorate will now be losing two of its earlier directorates, one (employment law) to the President himself and one (Workforce Planning and Employee Policies) to the PD People. I have tried to show this here: 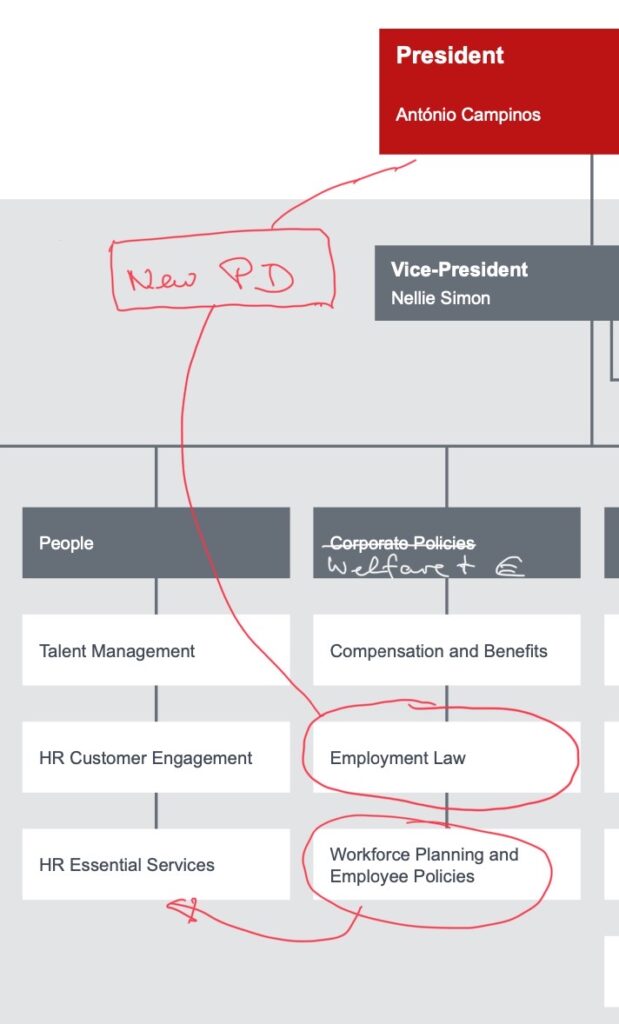 In lieu of these two directorates, a new directorate “Prospects and Studies” will be established and assigned to Corporate Policies, which is supposed to “help ensure that the social package the Office provides, remains competitive and sustainable for current, past and future staff and their families”. For this purpose, the new directorate is supposed to conduct regular benchmarking exercises, studies and to closely monitor economic and demographic indicators. And, even more remarkably, the new Principal Directorate will also be renamed. Its new name will be “Principal Directorate Welfare and Remuneration”.

Whether this change in name and organizational structure will really signalize a difference in the EPO’s approach towards its staff and whether it may even forebode a change in the responsible manager (“Chief”) of this entity remains to be seen. The current Chief Corporate Policies Officer, Mme. Elodie Bergot, who used to be the EPO’s PD for Human Resources under President Battistelli, has not exactly acquired a reputation in the EPO of standing for social harmony, as reported by JuVe, and has at times even shown weaknesses in observing fundamental rights of employees such as the right to strike, as the Administrative Tribunal of the ILO held. These are perhaps not the qualities that one might expect from a Principal Director who is supposed to be responsible for “Welfare and Remuneration” of the office staff.

Thus, while some scepticism is always appropriate (see: Es gibt nichts Gutes. Außer man tut es.) and there is always the possibility that these changes are just cosmetic (or even Orwellian) in nature, one might at least cautiously hope that these organizational changes are meant to signalize a bit of a change to the better. Employment law will now be made “Chefsache” and the PD renamed as “Employment Law and Social Dialogue Advice”, which is perhaps no bad approach if the idea is to avoid future negative headlines arising from AT ILO decisions and unpleasant discussions in the Administrative Council (always provided that actions follow the words!). Moreover, an important directorate that will likely play a big role in establishing the EPO’s “New Normal” including more working from home (more on this in a later blog), will be moved to PD People. Let us hope that these changes will help to promote more social peace and more meaningful dialogue with staff at a stage where decisions have not already been made.

Until then, let us praise God in silence (BWV 110) and hope that our mouth will be full of laughter and our tongue of singing (BWV 120) again in a couple of months.