A few days ago, our Kluwer News Blogger reported on a decision in the Netherlands, holding two Dutch patents for processing the Ethiopian grain “teff” as null and void. While this decision certainly has a political dimension, which formed the focus of the reports in the general press and the report from the Norwegian Fridtjof Nansen Institute, it also has a dimension extending into the issue of patent quality. Let me explain why:

So the claim seems to pertain to the Ethiopian grain Eragrostis tef (also known under its common name Teff), characterized by a certain parameter, i.e. the “falling number of the grain at the moment of grinding”.

I have to say that claims of this type always make me quite curious, not to say suspicious. Two questions immediately spring to mind: (i) What is so special about this parameter, and (ii) how does one obtain a teff satisfying this parameter?

The patent firstly explains at length that teff is a great grain. It is gluten-free and thus very suitable for babies or persons suffering from a gluten intolerance such as celiac disease patients. Besides, it seems to be a great crop for our changing climate, as it does not make high demands on the nutrient medium and the climate and is particularly well resistant to drought. So far, so good. Then the patent continues in [0010]:

[0010] In summary, Eragrostis offers an attractive source of (gluten-free) flour. However, it has been found that the preparation of a food product with traditional Teff flour (for instance Teff flour which is mixed with wheat flour for preparing injera) often causes problems. A known problem is the instability of the product, particularly of baked products. In other cases, the product has an unattractive taste and/or structure.
[0011] The invention provides the insight that the above-mentioned problems surprisingly do not occur if Teff flour with a particular falling number is used.

Okay, so now we know which advantages are said to be associated with the magic parameter of the “falling number”. And it gets even more interesting:

Different Teff varieties have been tested in different after-ripening stages and under different cultivation conditions (such as climate, soil type, fertilization) on test and cultivation fie lds. Samples hereof have been collected and analyzed for inter alia falling number and baking quality (with test breads prepared according to the formulation and method of Example 1).
This shows that a falling number of at least 250 is needed to obtain a baking product with an acceptable quality, that is, a product that is awarded at least a grade 5 (on a scale of 1-10) by a test panel. A falling number of 300 results in a significantly improved product (assessment: 6), while a product of Teff flour with a falling number of 380-390 is, on average, awarded the grade 7. It can be gathered from Fig. 1 that, for a product which meets the ’market standard’ of 7.5, the use of Teff flour with a falling number of at least 400 is required.

Now, the patent further discloses (in [0007]) that Teff has been cultivated for human consumption in mainly Ethiopia and Eritrea for more than 5000 years, and that it is traditionally used for preparing injera, a spongelike, gray pancake. This leaves only two possibilities: Either these people from Ethiopia and Eritrea never managed to produce a baking product (such as a pancake) with acceptable quality for the last 5000 years. Or there is perhaps something wrong with this patent claim.

Which brings me to question 2, how is teff obtained that has a falling number of at least 250? The patent does not hide the answer, one just has to read further:

[0014] The traditional Teff flour, which is obtained by grinding the grain directly after the harvest, still causes problems with the processing thereof in baked products, as elaborated upon in the introduction. The invention now demonstrates that the reason for this is that, directly after harvesting, Teff grain of known Teff varieties has too low a falling number (that is, lower than 250) to be processed into an attractive product.

[0015] It is generally known that grain goes through an after-ripening process after harvesting, in which the falling number of the grain increases. Preferably, a flour according to the invention is obtained by storing the harvested grain kernel and/or having it after-ripen for some time and only grinding the grain after the falling number has reached a value of at least 250.

So the trick is not to use the teff directly after harvesting, but to store it for a while before grinding. And it seems that it was even “generally known” that by such storing (and “after ripening”) the falling number increases. Hmm.

Next, I wondered how long does teff have to be stored to have a falling number of more than 250 and thus fall under claim 1 of the patent at the time of grinding? The patent in [0015] does not conceal the response:

The invention provides flour of Eragrostis spp. grain, with the grain having been ground at least 4, preferably at least 5, and more preferably at least 8 weeks after harvesting. Such a period is usually sufficient to obtain grain which has after-ripened sufficiently and has a falling number which meets the above-mentioned conditions.

Thus, the conclusion appears pretty compelling that this patent protected any kind of teff, when stored at least 4 and preferably at least 8 weeks after harvesting, before being ground.

And people never thought about storing teff for a few weeks or longer before using it?

I have not carried out a prior art search but I find this extremely hard to believe. Musing about what people may have done with grain even a couple of thousand years ago, my old bible came back to my mind. And it turned out that Genesis 41, 33 is at least a nice Y document, in my humble view. Here is what Joseph advised the Pharaoh:

33 “And now let Pharaoh look for a discerning and wise man and put him in charge of the land of Egypt. 34 Let Pharaoh appoint commissioners over the land to take a fifth of the harvest of Egypt during the seven years of abundance. 35 They should collect all the food of these good years that are coming and store up the grain under the authority of Pharaoh, to be kept in the cities for food. 36 This food should be held in reserve for the country, to be used during the seven years of famine that will come upon Egypt, so that the country may not be ruined by the famine.”

Which brings me to my real question: How could such a patent claim ever be granted?

The examiner seemed to have had no difficulty with it. It was a direct grant following a positive IPER, where the following was stated: 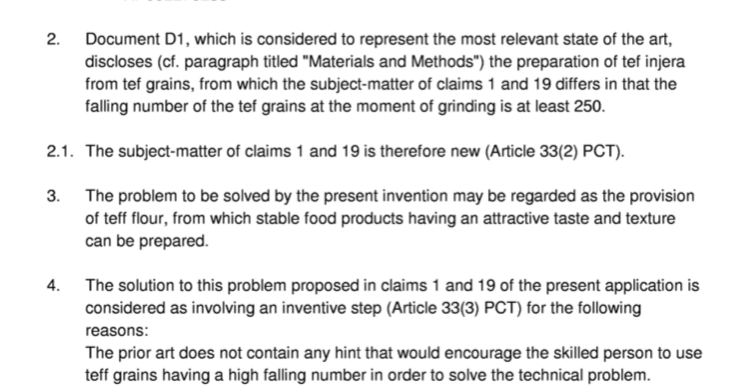 All quite understandable, at least if one limits the examination to a reading of the claim and the paragraph stating which problem the claimed invention is to solve.

Yet, somehow this grant leaves a certain feeling of discomfort.