In recent years, the Court of Appeals for the Federal Circuit has invalidated or affirmed the invalidity of various biopharma patents under 35 U.S.C. § 112, which requires that a patent specification contain a written description of the invention and enable any person skilled in the art to make or use the invention. The court system, however, is not the only venue for such invalidity challenges. Post Grant Review (PGR) provides an alternative opportunity to challenge newly issued first-inventor-to-file patents on any and all grounds of invalidity, including § 112 grounds, before the Patent Trial and Appeal Board (PTAB). But, these challenges come with a significant estoppel risk. That is, an unsuccessful PGR petitioner will be estopped from raising arguments that “reasonably could have been raised” in the PGR process during subsequent district court proceedings. When weighing this heightened estoppel risk, one factor to consider is how § 112 challenges have historically fared at the PTAB.

In a prior survey of PGRs for bio, pharma, and chemical patents prior to April 30, 2020, a total of 28 cases, revealed an institution rate of roughly 64%. It further concluded that there was a 78% success rate of finding challenged claims unpatentable in the instituted PGRs that had reached a final written decision.

This article updates that earlier analysis. 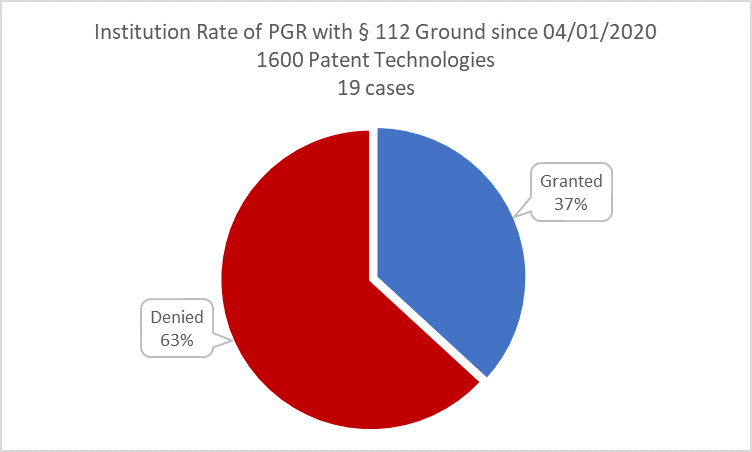 A comparison between our results and the prior survey suggests that there has been a significant decrease in institution rates, but it should be noted that the numbers of PGRs in these analyses are small. Even if institution rates have markedly declined, it should not discourage patent challengers from bringing PGRs based on § 112 grounds because no estoppel attaches in cases that are not instituted. And, when a PGR is instituted, the success rate for finding claims unpatentable has remained high.